There are three types of bloat; 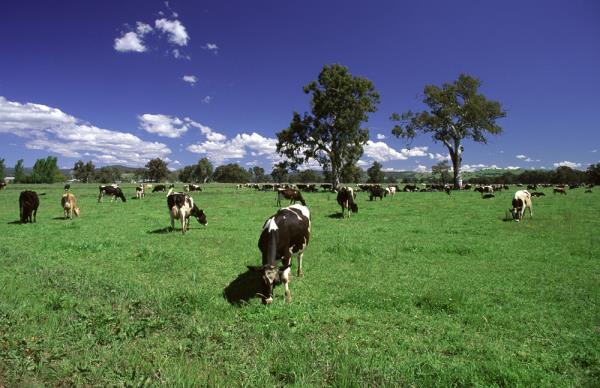 What is Frothy Bloat?

Frothy bloat is a common problem with cattle grazing lucerne or succulent clover-dominant pastures, especially if white or red clover is the dominant species. Bloat can also occur in cattle on a green cereal crop or lush grass-dominant pasture, but is much less common.

With frothy bloat, gas produced during fermentation in the rumen is not belched up as normal, but instead remains in the rumen as small bubbles suspended in foam. Cattle cannot belch up foam. Pressure builds up in the rumen as the foam accumulates.

The most obvious sign of bloat is a tight, distended abdomen, especially on the left flank. Affected cattle stop eating, separate from the rest of the mob and become restless. They often get up and down, look at their flanks and kick their bellies. Severely affected cattle have difficulty breathing, and stand panting with their tongues hanging out.

Death can occur within 30 minutes of the first signs of bloat. Death is a result of pressure from the rumen pushing forward and up, compressing the lungs (which makes breathing difficult) and the major blood vessels (which restricts blood flow around the body). Many cattle with bloat are simply found dead in the paddock.

A diagnosis of bloat is based on the signs shown by affected cattle, and the history of grazing a high risk pasture. When cattle are found dead in the paddock, a post-mortem examination is necessary to rule out other diseases such as blackleg.

In severe cases, where a bloated animal is panting to breathe, treatment is a matter of great urgency. A half hour’s delay is likely to be fatal. Use a sharp knife with a guarded blade. Stab through the upper left flank into distended rumen, then twist the knife. This produces an explosive release of rumen contents and immediate relief for the cow. Try to keep hold of the rumen wall, to prevent it from changing position relative to the cow’s side, and the abdomen filling with rumen contents. If the abdomen is not too contaminated with rumen contents, the cut is sewn up, and antibiotics are given to help fight infection, there is a good chance the animal will survive.

With less severe cases, the best treatment is vegetable oil, given as a drench or injected directly into the rumen. The oil helps to disperse the foam. Tiny droplets of gas within the foam coalesce into larger bubbles, which are belched out. The type of oil is not critical – peanut oil, cotton seed oil, paraffin oil and linseed oil are all suitable. Cream can be used in an emergency. 250millilitres of oil per cow is recommended.

Death from bloat can occur so quickly that the emphasis must be on prevention rather than treatment. For beef herds, there is a number of bloat control options.